by Administrator 1 year ago1 year ago
7views

Extinction Rebellion (XR) activists have blocked more than a dozen Amazon depots across the UK as Black Friday protests cause severe disruption for drivers.

The activist group tweeted that it is blockading fulfilment centres at 13 sites across the UK, including Manchester, Bristol, Tilbury in Essex and Dartford in Kent.

The group posted a video of the blockade at Dartford where six protesters were filmed holding up a banner saying: “Black Friday exploits people and planet.”

Amazon has come under criticism for the treatment of its staff, with 1,000 ambulance call outs to its UK depots since 2018 and 178 to its Tilbury site where a worker died this month.

The impact it has on the environment by pushing and delivering cheap goods has also previously been criticised.

In 2018, Amazon emitted 44.4 million metric tonness of carbon dioxide — greater than the carbon footprint of Switzerland.

Police are tackling protests at an Amazon warehouse in Tilbury, Essex, where disruption is expected to continue over the coming hours. 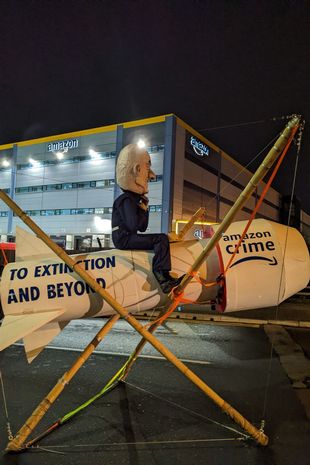 XR plans to stay at the Essex depot for 48 hours, where it is using concrete lock-ons, bamboo structures and a lorry to block access, while a person dressed to look like Amazon founder Jeff Bezos rides a rocket called “Amazon Crime”.

Essex Police tweeted: “We’re dealing with a protest outside an Amazon warehouse in Windrush Road, #Tilbury and engaging with people at the scene to ensure it remains safe.

“However, we expect the disruption to run into the morning rush hours and we’re asking motorists to take some delays into account.”

The protest group claims it has targeted Amazon as it holds it “responsible” for environmental damage.

The aim of the protest is to disrupt Amazon’s business on what is one of the biggest shopping days of the year in order to force the global giant into changing its “highly climate-destructive corporate practices”.

XR South East UK tweeted: “ExtinctionRebellion blockade #AMAZON fulfilment centres across the UK and Europe on #BlackFriday holding them responsible for the damage they do to #PeopleAndPlanet. #InfiniteGrowthFinitePlanet.”

Protesters arrived at a Amazon distribution centre near Bristol at 4am and have “locked on” to bamboo towers and scaffolding structures, completely blocking two access roads to the site.

A road near Manchester Airport by an Amazon depot has also been closed due to protesters.

Transport for Greater Manchester have advised motorists to seek alternative routes away from Sunbank Lane.

The Darlington centre has also been targeted by a small group of protesters who huddled in the middle of the entrance road as rain lashed down.

The protests have had a backlash on social media with people critical of the disruption, offering similar arguments as to those widely circulated when Insulate Britain campaigners blocked roads around London.

One person tweeted: “Agree with saving the climate…but you need public support to get the government to care.

“Blocking roads just annoys folk and loses you the good will from the public (especially the working ones whos[e] taxes pay your benefits).”

Another wrote: “That it guys, that’ll get the public onside I’m sure. Nothing gets public support like stopping us getting to and from work….”

Similarly another person tweeted: “All ‘done is inconvenience a lot of regular working class warehouse staff and truck drivers trying go get home or to work.

“I did not need that s*** after a 50 hour week! I agree with saving the climate but these actions are just driving folks like me away from your cause.”

Amazon’s own figures from 2020 reveal that the corporation’s carbon emissions rose by 19% year-over-year in spite of the global shutdowns caused by the Covid-19 pandemic, reported BristolLive.

The corporation pledged in 2019 to become net-zero by 2040, but XR activists say that there is “no evidence for how that will be achieved and the pledge does not include Amazon’s supply chain”.

Chris, a former Amazon employee, said taking action against the company was an “absolute necessity”.

“We can no longer live under a system based on manipulated overconsumption coupled with continued, destructive economic growth at the cost of people and planet,” he told LBC.

“Amazon’s entire business model is based on growth. As it’s empire grows, so does its emissions, yet workers live fear of organising against this.

“The union busting tactics of Amazon need to come to an end and it’s time the workers of Amazon were given a proper voice in how their company is run.”

The protests come as the Government forges ahead with its plans to significantly curtail campaigners rights to demonstrate.

It has argued a protest crackdown is needed to protect the public from severe disruption caused by the “reckless and selfish tactics” of eco-activists.

Climate change demonstrators had “overstepped the line”, argued Home Office minister Baroness Williams of Trafford yesterday as she made the case for a series of changes to the Police, Crime, Sentencing and Courts Bill in response to action taken by Insulate Britain and others to shut down major transport networks.

These included tougher sentences for blocking motorways and roads and allowing police officers to stop and search anyone at a protest “without suspicion” for items used to prevent a person being moved, known as “locking-on”.

Individuals with a history of causing serious disruption also face being banned by the courts from attending certain protests.